From 2013 to 2018 the compute systems of the HLRN-III had been installed at the compute sites Zuse Institute Berlin (ZIB) and Leibniz Universität IT Services (LUIS/RRZN at university Hannover).

Namesakes of the HLRN-III systems

Starting with the HLRN-III first installation phase, four Cray XC30 racks equipped with Intel Xeon IvyBridge processors were set up each at ZIB and RRZN. For the HLRN-III second installation phase, the complexes at ZIB and RRZN were substantially extended with six and five additional Cray XC40 racks, respectively, equipped with Intel Xeon Haswell processors. 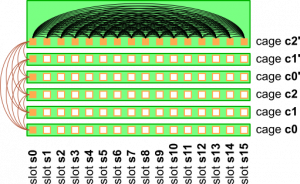 SMP system (at LUIS only)

The SMP system was composed of the components SMP1 and SMP2 (installation phases 1 and 2) from the company MEGWARE, holding Intel Xeon processors.

Test and development system (TDS, at ZIB only)

The test and development system was dedicated to the evaluation of new technologies. It was equipped with Intel Xeon Phi precessors and SSD storage devices. TDS was open for all HLRN users, in particular for code developers.